Over the years to increase software delivery organizations have succeeded in the implementation of agile methodologies. It started primarily in the software development organizations and has progressively expanded further downstream, specifically IT and operations. Agile way of development has shaped a process for developers’ community to quickly ship a new version of their code. DevOps seems to be the subsequent step in this due course. It is the capability of DevOps to help get that code into production as fast as possible. Now the question arises what do the development teams require to embrace DevOps?

DevOps is all about empowering the teams to be capable to do their job quickly and bring the product into market promptly. There are three critical things that each development team is required to embrace. 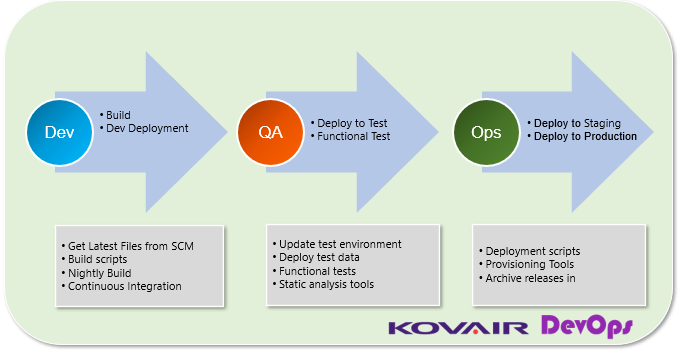 For an organization if the objectives are to build and deploy fast with consistency then it needs a stable build process and a platform which can perform the same over and over without fail. The platform should allow to connect and configure multiple tools for the Build and Deployment process and should work in unison to achieve the goal.

Over the years the build has been done manually by a build engineer. The process includes remotely accessing the server, extract the latest source code, build, and deploy using xcopy. It was a manual job, but it worked. The problem arises when the build engineer is gone or forgets a manual step, and then all sets of problems arise. Over time the complexity grows, and the build server, while stable, is loaded with numerous versions of build.

With Kovair DevOps one can create granular level task to automate build and deployment pipeline Task. The Task allows to automate every manual step that was being done previously. Task like getting the latest files from repository and executing standard and custom build commands to build the source and produce artifacts. With the Kovair platform, this could be done on time and every time. Kovair provides ANT, Maven and MS Build plug-ins for achieving the build. Kovair also provides Plugins for GitHub and Team Foundation Server for code repository.

Considering various domains and application types, provisioning servers is a very large subject. In many organizations, particularly if they are product oriented, they always tend to deploy to the same servers, and perhaps do not feel the need to set up new ones on regular basis. Most applications never run on more than a few servers. Their applications just do not get enough traffic. In those cases, provisioning new servers are not the primary issue.

For an enterprise level organization, it is always recommended not to involve engineers in the creation of the servers constantly every time. With automation, this could be done much faster at any point of the time without any physical dependency on any engineer.

Another new way to solve this problem. Instead of provisioning a lot of virtual machines, packing a bunch of lightweight Docker containers is much easier.

This approach provisions actual servers, the problem with servers is knowing the exact configuration required. It varies wildly based on its specific application.  This includes things such as installing the web server, application framework, Operating System (OS) updates, security patches, permission and various other dependencies. To resolve this challenge, configuration tools like Ansible has become much popular.

Kovair DevOps have the plug-in for Ansible which allows to Create and Launch Jobs from Pipeline and get the live status. Moreover, if the launch fails, relaunch could be done from Kovair DevOps Pipeline.

Application monitoring tools are the windows to the development team in production. In most organizations, developers do not have direct access to production servers and there could be many reasons. However, it is quite difficult for developers to troubleshoot problems without getting access to log files and other data.

Application monitoring is an entirely different paradigm than server monitoring. Some years ago, the primary key for monitoring was server CPU usage and its peaks. In today’s technology world, application monitoring is a vast area that could mean a lot of different things.  DevOps world has always focused on deploying applications, but it has been identified that developers need visibility on data about how their apps are performing to troubleshoot problems quickly. It is an essential component of DevOps.

With Kovair DevOps plug-in and with tools like Dynatrace, it is easy to track applications, problems, close problems, add notes to problems with complete flexibility of providing pass and fail conditions.

Following are the whole suite of Plug-ins that Kovair DevOps will support. The diagram below shows the Kovair road map for the DevOps Plug-ins. 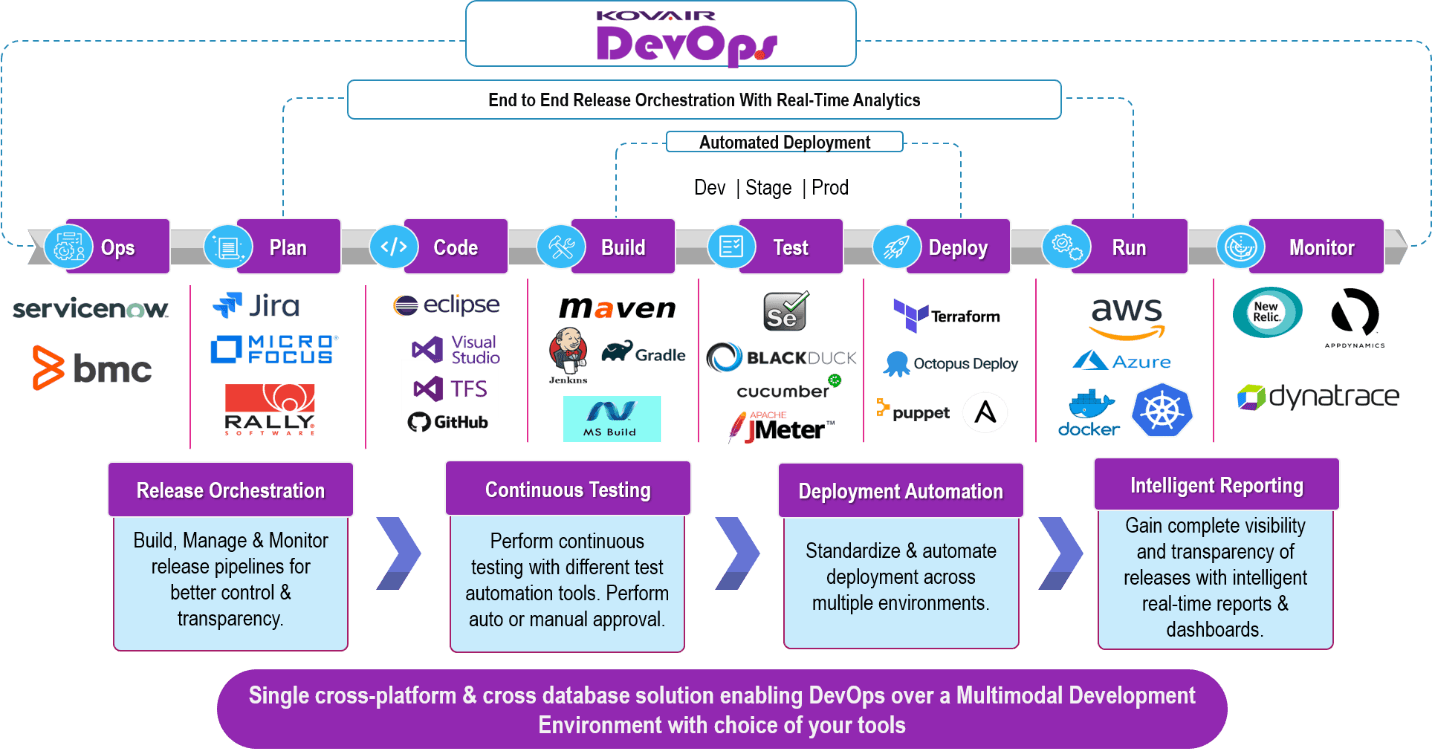 Over the years, it has been observed that developers require and love tools to delve on. For an engineering organization, implementing DevOps is a must and for the same we need tools in order to help them build, test, deploy and monitor their applications. The aim of DevOps is to remove barriers across the teams for accelerating the delivery. Kovair DevOps intends to solve the said problem and bring a unison process for delivery for better customer experience and gain organization level productivity.

Joydeep Datta serves as Director for Product development, responsible for all engineering offerings. He brings to this role deep expertise in the architectural design, core Integration architecture, Application & Technology Architecture. He has more than 15 years of experience. He is responsible for architecting and implementing enterprise grade products and specializes in process and data integration.