Eclipse is known as an industry’s leading Open Source platform for Java based software development. Eclipse as an IDE (Integrated Development Environment) is mostly used by the developers. Today, with the growing involvements of multiple stakeholders in almost all phases of software development lifecycle, attaining collaborative development environment has become a mandate for them. This is, regardless of their geographical locations and job roles. One also cannot rule out the necessities of adopting disparate ALM tools, and often some of them are outside the scope of the Eclipse environment! Now, the question is ‘how do we enable Eclipse developers to share information back and forth with other stakeholders from within their familiar Eclipse environment?’ ‘Kovair Plug-in for Eclipse’, a platform for Eclipse developers, ensures collaboration among the stakeholders throughout the development lifecycle via synchronization among disparate ALM tools. While working with this Kovair plug-in, the access of Eclipse developers can be extended to the other artifacts like Requirements, Design Artifacts, Test Cases, Tasks, and Defects originating from diverse ALM tools without requiring them to leave their preferred IDE. Kovair plug-in for Eclipse is a dream come true for Java developers who wish to use a single tool environment, both for doing their primary development jobs and collaborating with other teams. This plug-in helps any organization to provide an enhanced platform for their developers, where its established processes, tools, and practices can be seamlessly integrated.

How does the Eclipse Plug-In Work?

Talking about the Kovair plug-in for Eclipse, the integration framework of Kovair, also comes into the picture as both are complementary to each other in terms of their functions. Kovair Omnibus Integration Platform offers an open and seamless integration framework backed up by a central repository with all essential ALM services such as collaboration, traceability, process automation, security, reporting and analytics based on cross tool data. The Kovair Omnibus enables enterprise organizations to make lifecycle tools active participants in the overall ALM process as part of an Service-Oriented-Architecture (SOA) based ESB architected platform.

Kovair has built an open ‘Omnibus Plug-in architecture’ that talks to individual tools integrated with the Omnibus Engine through Adapters or Connectors. The plug-in for Eclipse is also SOA-based similar to Kovair’s Omnibus architecture. Using Kovair Omnibus platform and its SOA based APIs, any organization can create its own set of plug-ins for their homegrown tools. Kovair plug-in for Eclipse extends the Eclipse IDE with menus to connect to Omnibus which represents an organization’s TIDE (Tools Integrated Development Environment). Eclipse users, generally the developers, can connect to Omnibus by using authentic user credentials in the Login dialog. After successful login, they can see the Projects and the Artifacts (for example, Requirements, Design items, Test Cases, Tasks, and Defects) in a tree-like format, exposed in an Explorer window. Without leaving the Eclipse IDE, they can navigate to see the list of Requirements, Test Cases, Tasks and other items. Though artifact items can be exposed to developers, the options to view, update, add, and delete items depend on their access privileges. Kovair plug-in for Eclipse, talks to the Omnibus Service through open APIs that collect data from integrated ALM tools. The developers are then able to work on them as per given privileges. Once the changes are made on the collected data from Eclipse IDE, Omnibus Service updates them in respective ALM tools. 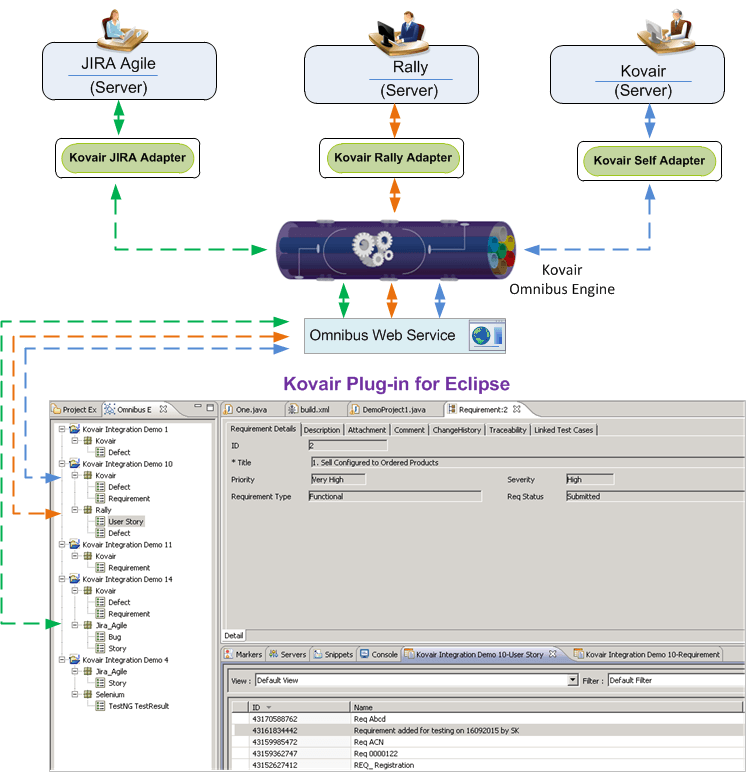 JUnit (Unit Testing tool) and ANT (Build tool) plug-ins available in Eclipse environment are also extended by Kovair. This facilitates Eclipse users to create new items like Defects in the context of a failed test case in JUnit and build failure in ANT. 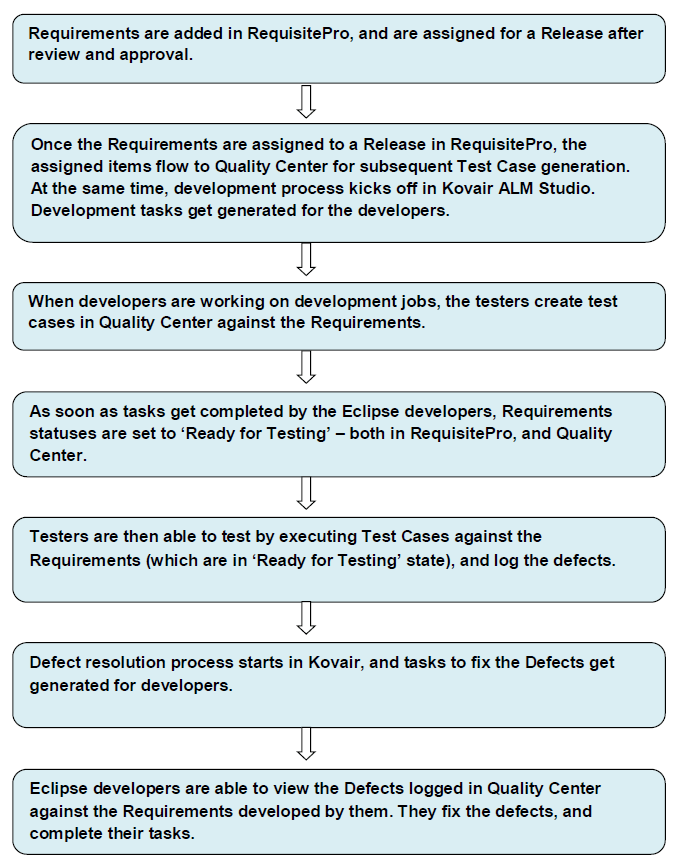 The above scenario shows how Eclipse developers can collaborate with other teams or stakeholders throughout all the phases of software development lifecycle, and become a part of the overall process. Kovair plug-in allows them to do all these activities without leaving their preferred Eclipse environment.

Why Omnibus Plug-In for Eclipse

With Kovair Plug-in for Eclipse enabled, developers get easy access to Requirements, Design items, Test Cases, Defects, and other artifact items directly from within their IDE. These items may originate from different ALM tools, but developers can simultaneously operate on all these items from their native environment. Developers can even update the status of defects from the IDE, without logging into the defect management system. The plug-in also reduces a lot of training time for Eclipse users that is otherwise required to learn different tools.

Synchronized activities of stakeholders and timely completion of their tasks matter a lot for a software development project to be completed within a given deadline. Developers often find it difficult to submit their work results in a timely manner. This happens when they need to switch between tools for reporting, or completing their tasks. It has been observed that developers are less interested to leave their familiar IDE and work in different other tools for some other purposes. This attitude puts off tasks that require access to a different tool to the last minute. More often than not, they forget to accomplish the tasks. By virtue of Kovair Plug-in for Eclipse, the users can develop codes, do code validation using LDRA, perform unit testing using JUnit, create software builds using ANT, and report the results immediately – without leaving the Eclipse IDE! This is a definite plus for capturing work outputs more efficiently.

Generally, developers express concerns about introducing a new process to their existing work system. They perceive process as something having overheads that puts extra workload on them beyond their regular jobs. With Kovair Plug-in for Eclipse, they can easily view the process and tasks from within the IDE, work on them, and readily mark the tasks as completed when finished. In this way, they can become a part of the process – even without knowing it! Kovair process automation framework does the job from behind the scene. It generates tasks as per process design, and then once a task gets completed, it automatically generates the next task for appropriate stakeholders. Kovair’s built-in Process Engine, and Plug-in for Eclipse, together remove the complexities of enforcing automated process, and ensure better acceptance by all stakeholders.

Kovair Eclipse Plug-in allows users to establish traceability links with artifacts from different tools. The links are stored in Kovair and are visible to all Plug-In users. This enables users to link their code artifacts like files, classes and methods to Design Elements in the modeling tool or with Defects in the defect management tool. Useful information like which method was modified to fix a particular defect can now be easily found by all Kovair users without even leaving their Eclipse environment.

Accomplishing tasks with quality outcome often requires a wider vision and an extended accessibility to related information or knowledgebase. In an IT environment, linked information from disparate tools need to be exposed to the right stakeholders at the right time – for them to come up with ‘Quality’. This plays a big role in the success of IT projects. By virtue of Kovair Plug-in for Eclipse, developers have ready and real-time access to the Requirements and Test Cases from within Eclipse IDE. Thus, they remain more informed to perform better coding and testing activities. In addition, with Omnibus plug-in support, “Review Tasks” created in other Project Management tools show up in the IDE environment which allows Project Managers and Team Leaders to do their review jobs within the IDE and submit the results immediately. All these activities result in the creation of a better quality software.

Using Kovair Plug-in for Eclipse, developers, testers and managers are able to capture a lot more micro level data like code analysis results, unit testing results, test coverage results, build results, and other detailed information. Project stakeholders are also able to view the analysis and reports based on these detailed data in Kovair, or any other Project Management tool integrated through Omnibus.

Kovair Plug-in for Eclipse allows developers to send regular reports on their coding, unit testing, bug fixing, and review tasks. Since the stakeholders work from within their familiar IDE, the scope of recording granular level information is higher. For example, by virtue of Omnibus integrated framework, data from associated tools can be transmitted to a Project Management tool for creating real-time reports. This results in greater visibility of the Project Managers on the overall project status as well as progress details.

You will receive PDF link in your mailbox.