Our client is a very large semiconductor chip manufacturing organization in the world. To keep track of the different artifacts associated with their software product lifecycles they had been using a few multi-vendor and some homegrown proprietary ALM tools. To solve the issues of good interconnectivity between these tools and prevent information and execution silos, the Company had for some time, decided on and implemented a point – to – point (P2P) integration model and create pairs of integrated enterprise tools or bridges. As the projects to be integrated grew into hundreds, they found it difficult to manage this workload and support and be responsive to their end users who had integration customization needs for different projects every time they started a new project or adopted new tools. This is when they started looking for a better and more efficient integration solution.

P2P Solution and their drawbacks

The P2P solution was a good start but slowly it started having problems. This architecture and implementation lacked efficiency, flexibility and speed. Some key issues were:

Figure 1: Integrating 2 Instances of 3 tools using exclusive P2P Integration Solution Such problems with the P2P Integration Solution made the company rethink their strategy and explore a less complex yet scalable solution. Among several Integration options the Enterprise Service Bus – ESB approach is currently the most flexible and hence the coveted one. Kovair with its Omnibus ESB Integration Platform is one of the leading Integration vendors and has been helping organizations globally with their application tools integration needs. Kovair Omnibus Integration Platform was the choice of this customer after a very extensive and thorough review that matched their criteria of flexibility, high productivity, scalability and end user’s accessibility and most importantly a low coupling architecture. Besides this, Kovair’s Omnibus Integration Platform has been proving its worth across multiple enterprises in various industry verticals including networking, telecom, manufacturing and financial organizations.

Kovair Omnibus Integration Platform was installed on premise in the customer’s servers. Kovair Omnibus n-tier architecture allowed separate VMs to be used for the installation of the different components like database, application and the adapter / connectors for connecting the tools with the ESB integration hub. The infrastructure provisioning and installation was followed by the initial Integration configuration to setup a few bridges by the Kovair team. The integration is very much like a plug-n-play mechanism with the adapters being used to hook the tools into the Omnibus Integration platform. The configuration for the first integration pair/bridge was completed within a week’s time which also included Service Account provisioning and other infrastructure level preparations. The configuration in contrast to the hard coded nature of the previous P2P system was entirely a UI based point and click approach. This allowed the organizational stakeholders to quickly find their way around the application and get started all by themselves. It gave a lot of confidence to the customer engineering teams that Kovair Omnibus was very intuitive and easy to use and new team members were onboarding on their own. Within a few days team members were able to configure bridges in 1-2 hours. Other than this, there are quite a few other benefits of using Kovair as listed below: 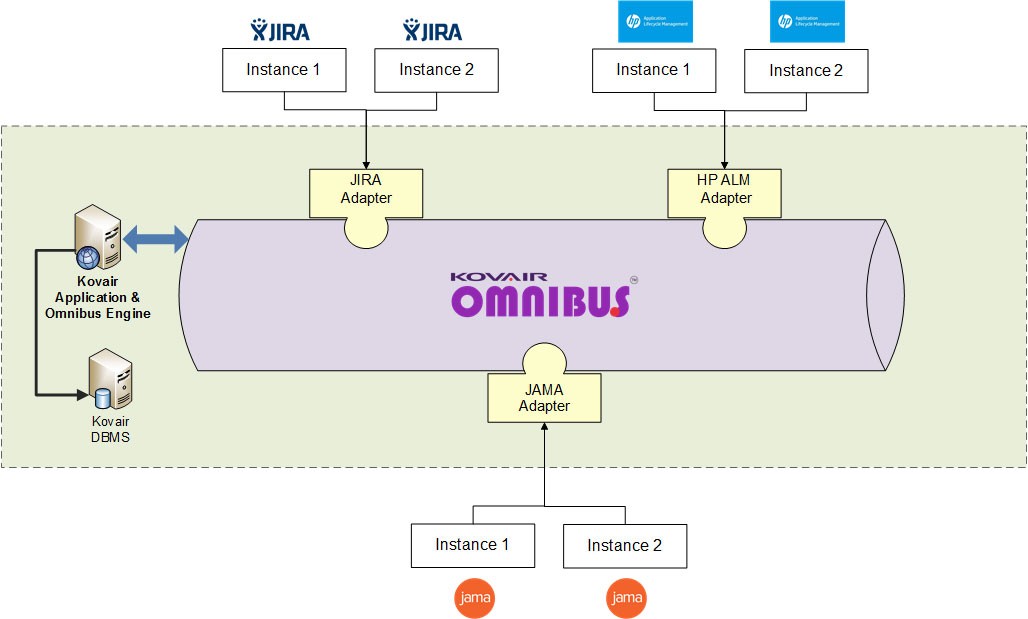 Figure 2: Integration of the 6 Tool Instances after the introduction of Kovair Omnibus Integration Platform

Productivity and Notifications – The time and cost that were saved in the process due to adopting Omnibus Integration platform is now being leveraged to further increase productivity. Due to the automation that can be included alongside the default functionalities mechanisms like mail notification in case any integration encounters an error has drastically reduced the manual maintenance overhead. Data Analytics – Data Lake Creation: The accumulated data has been successfully replicated and stored in separate database which forms the basis of a massive analytics project called Data Lake. As a part of this project, that entire accumulated data can be used in various tools like Tableau to have the basic data modelling as well as defining advanced predictive analytics to find meaningful pattern out of the data. Delivery Quality – The benefits of using Kovair has raised the delivery quality and expectation benchmarks of the organization who now have found the way to use the Omnibus Integration platform for creating an intelligent DevOps solution as well.

The customer is convinced that moving from their past practice of point to point integrations and customizing them for multiple project needs was a significant time and resource savings that they are happy to experience and at the same time better serve their internal end users and speed up company’s product development cycle. Their initial skepticism and very extensive scrutiny of Kovair has been converted into a very successful and pleasant experience. They are now focused on prompt conversion of old integration methodology to the Kovair Omnibus based integration implementations at a rapid pace by convincing more and more business groups within the company to adopt the new methodology at the earliest available opportunity. Kovair feels good that after an extensive scrutiny and a very thorough technical evaluation of all aspects of the Kovair Omnibus and associated ALM Platform it has a very happy world class customer. This should encourage other semiconductor and high tech product companies to adopt Kovair for their development tools integration needs without hesitation for prompt benefits along the lines noted here.
Download eCopy

You will receive PDF link in your mailbox.
This website uses cookies to provide a better user experience, personalize ads, and analyze our traffic. By clicking ‘Accept All’ or continuing to browse, you are consenting to the use of cookies. For more information about how we use cookies or to learn how you can disable cookies, read Privacy statement
Cookie SettingsAccept All
Manage consent

This website uses cookies to improve your experience while you navigate through the website. Out of these, the cookies that are categorized as necessary are stored on your browser as they are essential for the working of basic functionalities of the website. We also use third-party cookies that help us analyze and understand how you use this website. These cookies will be stored in your browser only with your consent. You also have the option to opt-out of these cookies. But opting out of some of these cookies may affect your browsing experience.
Necessary Always Enabled
Necessary cookies are absolutely essential for the website to function properly. These cookies ensure basic functionalities and security features of the website, anonymously.
Functional
Functional cookies help to perform certain functionalities like sharing the content of the website on social media platforms, collect feedbacks, and other third-party features.
Performance
Performance cookies are used to understand and analyze the key performance indexes of the website which helps in delivering a better user experience for the visitors.
Analytics
Analytical cookies are used to understand how visitors interact with the website. These cookies help provide information on metrics the number of visitors, bounce rate, traffic source, etc.
Advertisement
Advertisement cookies are used to provide visitors with relevant ads and marketing campaigns. These cookies track visitors across websites and collect information to provide customized ads.
Others
Other uncategorized cookies are those that are being analyzed and have not been classified into a category as yet.
SAVE & ACCEPT