Home > Technologies > Types of Software Development and Which one to Choose from? 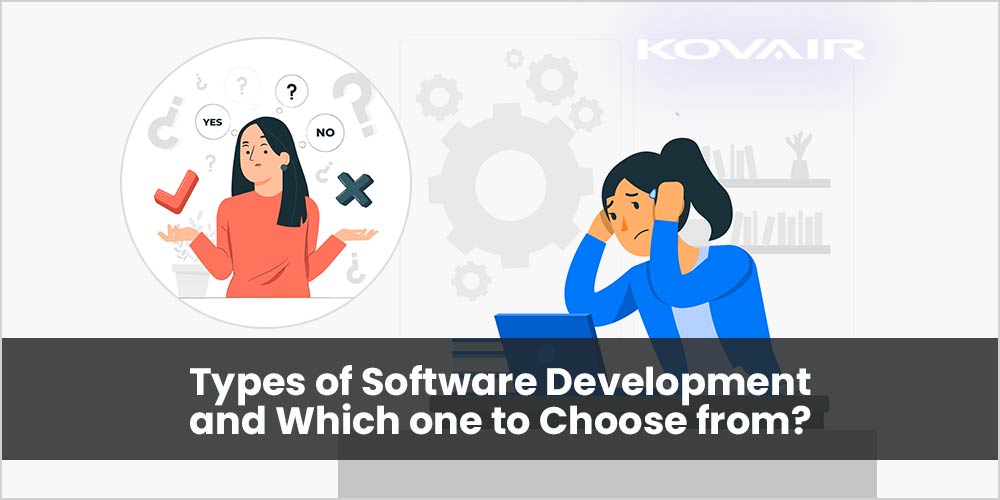 It is the process of building web applications. These applications can be accessed via the Internet Browser on various devices such as laptops, tablets, mobile phones, etc. Web apps are very dynamic and have two components: front-end (client-facing) and back-end (server-side).

The full stack developers should be able to design engaging sites with the help of HTML, CSS, and Javascript, build the server-side logic and connect the front end with servers using APIs.

Desktop Development primarily deals with creating apps that run in a particular operating system without internet connections. Large co-operations and businesses primarily use these apps to support their operations.

Mobile apps are of two types, native and hybrid apps. The native app is developed for a particular OS, which can be either Android or ios. Building a native app is efficient as you can use native APIs and OS-specific programming languages. Whereas Hybrid apps are written using a single codebase that can run on both IOS and Android, they are written in languages both the OS recognizes. The languages/frameworks used in mobile development include Objective C, Swift for iOS, Java or Kotlin for Android, etc.

Cloud computing is used to transfer data outside local servers and storage in remote servers hosted on the internet to make the data available globally. Cloud computing development involves creating software that powers storage applications such as Microsoft One Drive, DropBox, Amazon Web Services(AWS), or Github. Cloud computing developers should be proficient in Java, XML, ERLANG, Python, and Go.

It is a philosophy that combines the development process (Dev) and IT operations (Ops). It includes a set of practices that reduces the time between the change you commit to a system and the change that is implemented while maintaining the quality.

DevOps automates software development, testing, and IT operations to shorten and streamline the development cycle while delivering software features, fixes, and updates. DevOps is complemented with Agile for better products and collaboration. In short, it is characterized by shared ownership, workflow automation, and feedback. A DevOps engineer must possess programming, testing, integration, and scripting skills.

It involves creating video game software that runs on computers and gaming consoles. Specific frameworks are needed for game development, which are:

The role of an embedded system developer is to design, develop and create software and implement it into a device built around microprocessors.

Embedded systems are used in many products we use daily, such as motion sensors, gaming consoles, cars and vehicles, medical devices, etc. To do embedded systems development, one must know Raspberry pi, Embedded C, C++, Assembler, Python, Arduino, etc.

Data is vulnerable on the internet, and many try to manipulate or steal it. Ethical hackers and cybersecurity experts develop software that prevents data theft and intrusion of malicious viruses to prevent it from happening. To develop security software, one must know Python, Javascript, PHP, and SQL.

How one can select the best software for their company

Every software application is built for a specific function and requires a particular approach. For example, if you need software to store and process data and help in business operations, you most likely need a desktop application.

Similarly, if a company uses web applications and webpages, then it should use web development software and hire front-end, back-end, and full-stack developers.

Instagram, Facebook, and Netflix are all dynamic web apps and social media networks made using Web development. These pages have interactive user-facing pages with a complex back end that makes these sites functional.

Additionally, Software development companies develop various applications and widgets to help users perform specific tasks or assist them, and this is done with the help of technologies such as AI.

Companies that make electronic chips for computers, digital machines, or robots use embedded system development to program, develop and design chips that are used in electronic components.

Data analytics companies use data science to store and process data. All big tech companies use DevOps to streamline the software development process they require.

Rajamanickam Rajan is the Director at Skein Technologies which is a leading software development company in India. He holds an expertise in Analysis, Design, Development, Testing and Implementation of Hybrid and Native applications. Rajamanickam has mentored and motivated the development teams at onsite and offshore for successful deliveries.