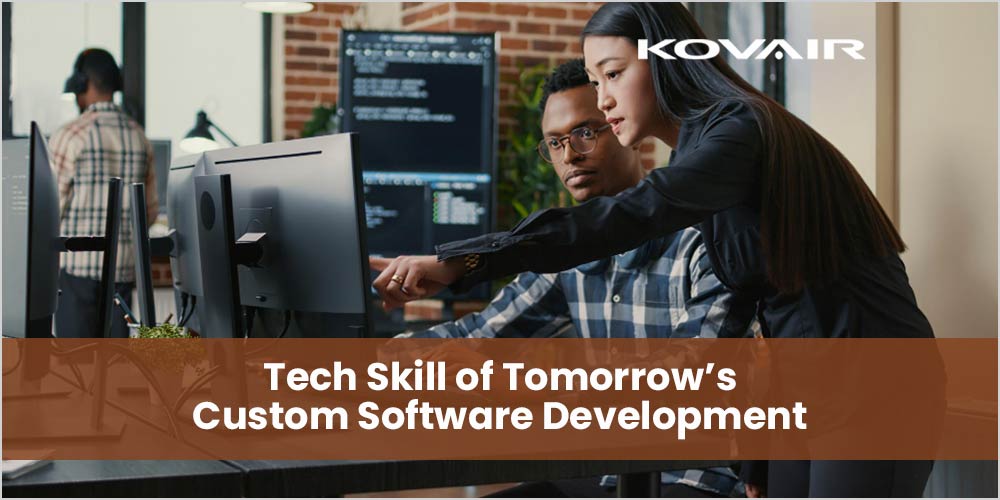 Several changes have occurred in society over the past two years due to the tragic events. In spite of this, Covid-19 has provided new prospects for independent software developers.

The digital world expanded as the real one collapsed. Businesses and industries depended on software developers to provide them with the digital solutions they needed to operate.

But how will this quickening of the digital transformation impact the future of creating custom software? As the industry improves, what top skills for software engineer will be in high demand now?

What are the top skills for software developers?

A software developer creates software that solves business and organizational problems and assists them in growing. In order to be successful at this task, the developer must possess an excellent combination of Rational & logical thinking, creativity, and good coding abilities.

Due to the high number of career changer applicants, employers find it challenging to pick the best candidate. A good candidate for software development positions is someone with extensive experience in the field and specialized skills that can be useful in Custom software development.

We have prepared a list of skills for that you need to boost your software development career. Please note that the skills listed here are not in any particular order, and you are free to follow any pattern.

Employers are most concerned about a candidate’s ability to understand algorithms and data structures after scripting languages. Software engineers should be familiar with data structures to create and organize data efficiently.

Developers use data structures to create algorithms that simplify tasks quickly and effectively. When studying data structures, you will learn about topics like trees, linked lists, heaps, and arrays.

Numerous online courses and certifications were available to learn and master data structure and its algorithms. You should try to complete them to show how knowledgeable you are about custom software development and stand out to the hiring manager.

The days of having and using a website and a native mobile app together are over. Now is the time for progressive web application development (PWAs).

It is possible to run a PWA on any device or platform using a web browser. Essentially, it makes the user experience easier and makes businesses less dependent on multiple websites and apps. Thus, expenses and resources are reduced, which could be better used elsewhere.

Moreover, a new “mobile-first” approach is being adopted. Smartphones are more popular today than desktop computers because we browse most of the time on them. People are engaging with technology differently today, which is leading to many businesses improving their browsing functions for smart devices to make them work flawlessly.

As a result, a PWA is frequently the best choice for software development.

As software developers, we must constantly adapt to the latest and greatest advancements in the tech and software industries because user preferences, as well as innovation, are constantly changing. This is true of PWAs as well.

The goal of this is to reduce the gap between online and native applications gradually, a number of companies have already developed PWAs. Organizations are recognizing the benefits of having all browsing and information opportunities in one centralized area, so PWAs will become increasingly popular. As a result, software engineers should be prepared to meet potential PWA prospects if they have not already done so and to broaden their skills in the process.

Testing comes after project development and planning. The majority of organizations conduct various tests before releasing a new product in order to find and fix any errors, problems, or performance issues. Therefore, a developer needs to understand the best software development tools that help them to develop codes & algorithms for executing tests.

The testing process involves a variety of different techniques; here are some to be familiar with:

A unit test – It puts each line or section of code to the test. This test aims to confirm that the codes are operating correctly during software developing.

Integrity Checks – During integration testing, the interaction between various blocks or modules is evaluated.

System evaluation – All tests have been completed; the last test is the system test, which evaluates the entire piece of software. Once more, external testing experts typically conduct this test.

In recent years, blockchain’s popularity has grown primarily due to its support for cryptocurrencies, similar to that of security and safety expertise. Software expertise in this area protects private and transactional data from fraud.

Cryptocurrencies like Bitcoin are starting to be used more regularly, even though they are still not openly used on the open market. Like cloud computing, a blockchain will revolutionize how society communicates and receives data.

Blockchain-related skills and knowledge in software engineers show a high degree of adaptability and a solid command of security. In the near future, developing custom software will require a thorough understanding of blockchain technology.

In addition to containers, data scientists and software developers should become familiar with cloud technologies by 2022. Since businesses of every size and in every industry are moving toward the cloud for cost savings flexibility, it will be necessary to build cloud-native applications sooner or later.

Furthermore, they are vital to all emerging research in Artificial intelligence (AI), Machine learning (ML), the Internet of Things (IoT), and computer science. They only run on the cloud and require enormous processing power.

Learning cloud systems such as Amazon Web Service, Google Cloud Platform (GCP), or Azure can give you a competitive edge in your current position as well as in your future careers. Studying one will give you a good idea of the rest; you don’t need to study them all.

As you think of developer abilities, “code” undoubtedly comes to mind,” However, low-code and no-code platforms are also very attractive to developers?

The use of low-code platforms allows users to configure programs, websites, and different things without having to write any code. Currently, 43% of all websites on the web are hosted on WordPress, a classic low-code platform example.

In the coming years, many IT companies and experts are going to use low-code platforms, so the demand for this skill will increase in 2022.

The Git software is a popular source control system widely used by software developers and businesses. With Git, developers can store different versions of their code in one folder, including the original version, and revert back if they need to clarify anything.

Due to the increasing speed at which software is being released, waterfall methodology, consisting of many steps that must be completed sequentially, makes it outdated. As a result, DevOps has replaced it by promoting collaboration between teams that used to operate in separate divisions, especially the development and operations departments.

According to the latest data, the percentage of businesses completely accepting DevOps has increased their business to 17% from 10% in 2017. Before, companies that had not heard of DevOps declined to 3% in 2018 from 6% in 2017.

As a matter of fact, Marketwatch estimates that the worldwide DevOps market will rise to $12.85 billion over the next five years. Having employees trained and capable of working on a DevOps team and handling DevOps tools is becoming more important than ever with major global firms implementing DevOps or preparing to do so.

Developers can create and modify the plain text, a standard file that is devoid of any formatting from word processors, using text editing tools. Because text editing software makes it easy to move the code into different systems and add formatting. Software engineers frequently use it to write the text and symbols needed for a coding language. It’s crucial to have proficiency in one particular text editing program so you can list it as a talent on your resume and generally speed up the software development process.

Here are a few illustrations of typical text editing software:

TextMate – The program supports mostly all programming languages and runs on the macOS platform.

Atom – This choice is open-source and designed specifically for programmers, providing access to Git and other useful programming tools.

Notepad++ – You can customize this free, open-source software in a variety of ways, such as by integrating it with another programming tool. Windows is the operating system on which it runs.

Brackets – This program can be integrated with Git-based applications or similar development tools on the macOS platform, Linux system and Microsoft Windows operating systems.

Successful software development positions are becoming increasingly competitive since they are among the top-paying professions. Consequently, candidates who are interested in the position should possess a wide range of skills. But what if you’ve never worked with software before? There are numerous benefits of custom software. Also, the coding institute or online courses can assist with this first stage, which entails learning the fundamentals by enrolling in the courses.

Additionally, many free resources are available to help you master the same or reach out to the best custom software development company in the market for help. Investing one hour every day for five days allows you to learn the basics of Hyper Text Markup Language, CSS, and (JS) JavaScript.

Krunal Panchal is the CEO & Co-founder of Groovy Web. He has been a hardcore programmer since he was 11 and started his professional career very young. His technical and logical mind drove him to choose coding as his destiny. At an initial stage, he got essential experience and the spirit of innovation and entrepreneurship.