Home > Technologies > How will the Fourth Industrial Revolution Affect Businesses? 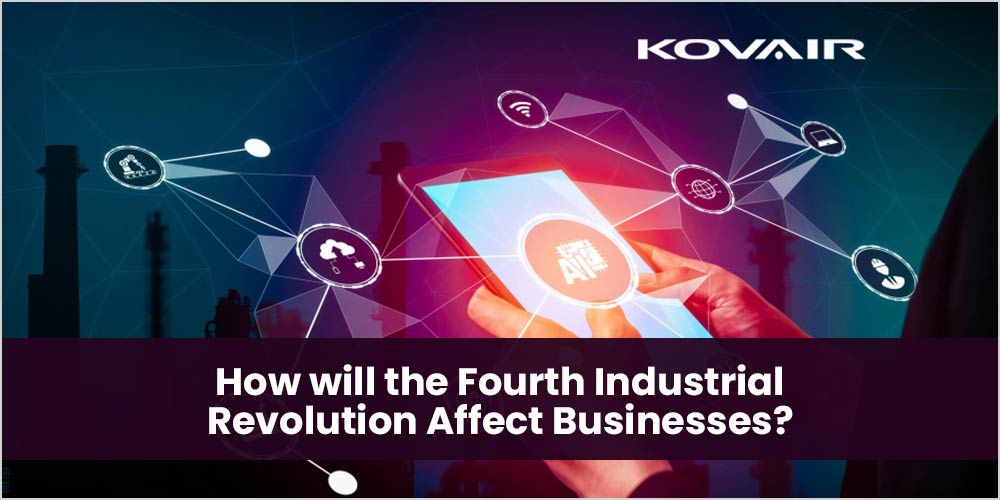 We are standing on the brink of a technological revolution that will fundamentally change the way we live and work. It has the potential to improve the quality of life for people around the world with the latest innovations and its transformation will be unlike anything that mankind has ever experienced before.

Transformations and disruptions are already occurring across various sectors around the world. Over the last few decades, technology enhancements have caused some roles to disappear while also creating new ones as well!

So will these changes with a website development company improve the current standard of living and the future of work? To know more about this aspect you need to explore the blog for more insights into the fourth industrial revolution’s impacts and benefits.

How Fourth Industrial Revolution came into being

The first industrial revolution occurred at the end of the 18th century and used the power of water and steam to mechanize production.

Here is the answer to this.

What is Fourth Industrial Revolution?

The fourth industrial revolution is considered a way of describing the blurring of boundaries between the physical, digital, and biological worlds. It is the fusion of different latest technologies such as artificial intelligence, robotics, 3D printing, quantum computing, and so on. However, it is not only about smart and connected machines and systems, its scope is much wider than that.

As a result, the fourth industrial revolution is paving the way for transformative changes in every aspect of our live and also disrupting almost every business sector.

Overall In simple terms, it can be defined as the shift from simple digitalization to innovation based on a combination of technologies.

Technologies of the Fourth Industrial Revolution

IoT is designed to establish a connection between the physical and digital worlds. It has revolutionized numerous sectors in different ways as we are currently using smartwatches, TVs and other electronic devices but soon everything will get smarter and we will get more innovations soon.

Big Data refers to the collection of data that is huge and complex in volume but yet growing exponentially with time. With this immense amount of data, it is easier to gain new insights about what will happen in the future.

There are Argumented insights that can extract future insights automatically and will help companies to get unpredicted pieces of information so they can make smarter decisions about what to do next with the help of a custom software development company.

Robots can be defined as intelligent machines that can perform routine or complex tasks autonomously. On the other hand, cobots enhance the work and activities that are performed by human beings. As a whole, they optimize the overall production and save the employees from doing dangerous and repetitious tasks.

AI is the ability of machines to learn and act intelligently meaning they can make decisions or even predict outcomes based on the data. In the future, it will transform the world and how we are currently living. Although it is already used in our everyday lives such as getting personalized Amazon product recommendations, Netflix and Spotify customized suggestions according to our choice of movies, songs, and so on.

The innovations that are carried out because of artificial intelligence and machine learning include facial recognition, chatbots, and everyone’s favorite speaking Alexa. It will infiltrate even more of our lives in the future as this is getting far better and better day by day.

Effects of the Fourth Industrial Revolution

As a matter of fact, across all industries, there is a shred of clear evidence that the technologies that underpin the fourth industrial revolution will have a major impact on businesses around the globe.

Neither technology nor disruption comes with a force over which humans have no control. We should prefer to think that the fourth industrial revolution will have a positive impact on the future of work. However, business leaders need to understand this changing environment and should relentlessly and continuously find more and more innovative eCommerce Development Solutions in accordance with this.

It is fundamentally different from previous revolutions in their scale of impact. In the end, the Fourth industrial revolution may have the potential to “robotize” humanity but it can also lift humanity into a new collective and moral consciousness.

How will Software Dominate the Automotive Industry?
Transform your Salesforce Experience with Robotic Process Automation

Amara works with the editorial team of DianApps, a leading company offering website development company. Exploring the latest technologies, reading about them, and writing her views have always been her passion. She seeks new opportunities to express her opinions, explore technological advancements, and document the details. You can always find her enjoying books or articles about varied topics or jotting down her ideas in a notebook.