Home > DevOps > How can We Automate Testing in a DevOps Setup? 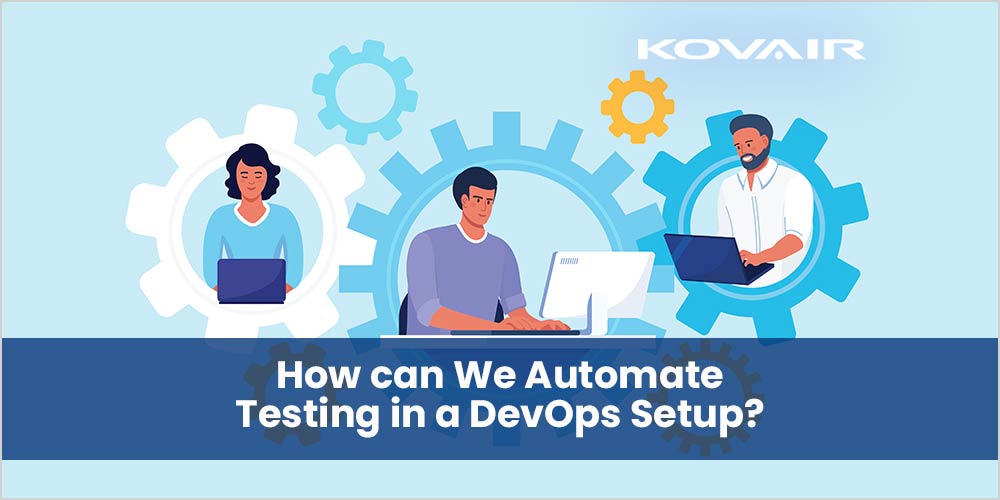 DevOps can be described as a combination of practices, tools, and cultural philosophies, which helps foster the organization or a business’s ability to offer services and applications at a much higher velocity. It helps evolve and improve their products at a rapid pace compared to the organizations that make use of traditional infrastructure management and software development processes. This fast speed allows the organization to provide better services to their customers and gain the upper hand in the market, in terms of competition.

How does DevOps work?

In a DevOps model, the operations and development teams are not siloed. In a few cases, both these teams merge together into a single one with the engineers working across the whole application lifecycle, right from the development stage to the testing to deployment and finally to operations, for creating a host of skills that are not limited to only one function.

There are a few DevOps models that involve the integration of the quality security and assurance team and the operations and development team all through the application lifecycle. The instances when security is the prime focus of the DevOps team, it is sometimes called DevSecOps.

These teams make use of various practices for automating processes that previously used to be slow and manual. They utilize technology tooling that helps them work on applications reliably and quickly. These tools allow engineers to independently conduct tasks (for instance, using provisioning infrastructure or codes) that otherwise could have been carried out only with the help of the other teams, which helps enhance the team’s velocity.

What are the major benefits of DevOps?

Higher pace and frequency of release, which helps innovate the product faster. The faster the new features are released and bugs are fixed, the quicker the business can respond to its customers’ requirements while building a competitive edge. Continuous integration, as well as delivery, are a few key practices that assist in the automation of the software release process, ranging from the build to the deployment.

Improved velocity for the organization, facilitating faster innovation for the customers, higher adaptability to the changes in the market, and better efficiency at boosting business results. The DevOps model allows the operations and developers teams to garner these gaols. For instance, continuous delivery and microservices enable the teams to have ownership of the services and given them updates quicker.

Quicker movement while having more control as well as preservation of compliance. An organization can use the DevOps model without compromising on security with the use of fine-grained controls, configuration management techniques, and automated compliance policies. For instance, by using infrastructure and policy as codes, the organization can track compliance.

DevOps ensures the quality of infrastructure changes and application updates, allowing the organization to efficiently and quickly deliver while offering a tremendous experience to the end-users. Using practices such as continuous delivery and integration for testing that each change is safe and functional is a great benefit. Logging and monitoring practices allow the organization to stay abridge of the performance and that too in real-time.

Under the DevOps cultural model, the organization is able to enhance the effectiveness of their teams, in turn emphasizing values like accountability and ownership. Developers and operations teams work together, sharing several responsibilities, and then combining all of their workflows. This brings down inefficiencies and also saves a lot of time.

Another key benefit is the ability to manage all the development and infrastructure processes at a faster rate. Consistency and automation help efficiently monitor complex systems and that too with lower risk. For instance, the infrastructure used as code allows management of the testing, production and development environments in a more efficient and repeatable manner.

Why is Automated Testing important for DevOps?

Test automation plays a huge role in the DevOps model. DevOps is synonymous with agile practices as well as CI/CD. These all have one thing in common, which is that they help enhance the speed and flexibility to facilitate an elevated flow via the release pipeline with fewer hiccups and quicker feedback loops. Overall, the objective of these concepts is to deliver high-quality product updates and releases, but at a better speed compared to the traditional models, like the waterfall approach.

With a manual approach, numerous steps part of the release pipeline slows down, while there are higher chances of errors taking place. Automation introduces accuracy as well as speed, elevating the possibility of faster delivery. Although testing is only a single aspect of the release pipeline, it is still the top candidate for automation. Especially regression testing, a highly time-consuming and repetitive task, benefits a lot from automation as tester resources are freed up. As a result, the organization is able to focus primarily on work that needs human expertise, and not on robotic work.

So, How can we Automate Testing in a DevOps setup?

A DevOps test automation tool is required to:

How to Implement DevOps from Scratch: Step-by-Step Guide
How Does DevOps Demand a Shift from the Traditional Cybersecurity Approach?