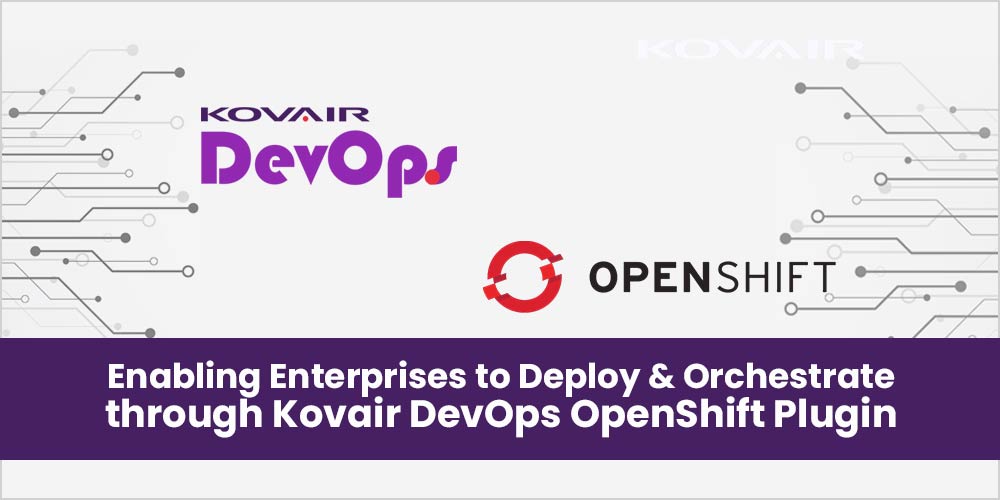 OpenShift is a containerization software product developed by Red Hat. The OpenShift Container Platform is one of the flagship products of Red Hat. It is a hybrid cloud platform as a service (PaaS) built around Linux containers orchestrated and managed by Kubernetes on the foundation of Red Hat Enterprise Linux. It is an open-source development platform, which enables developers to develop and deploy their applications on cloud infrastructure. It is very helpful in developing cloud-enabled services as well.

OpenShift provides a common platform for different organizations to host applications in the cloud environment which are independent of operating systems. OpenShift offers a user-friendly interface and seamless functionalities. Let’s discuss the benefits of OpenShift.

Organizations are now opting OpenShift and making use of it to the best of their abilities. So, the Kovair DevOps OpenShift Plugin has been designed to manage the OpenShift cluster from the Kovair DevOps platform. This plugin was developed and tested against OpenShift Container Platform v4.10 and OpenShift CLI client (oc) v4.10.

To configure a task to be executed over the OpenShift Container Platform, the end user needs to provide the authentication credentials along with the additional input parameters like project name, image name, application name, deployment name, and Other Options, etc. that can be provided based on the selected operation types. The end user needs to provide a suitable execution host for the task to be executed.

Sajjad Ali is a Quality Assurance Engineer and a developer of Helm and OpenShift plugin for the Kovair DevOps platform. He is a DevOps and Cloud enthusiast. He is having a working experience in containerization and container orchestration tools like docker, OpenShift, and Kubernetes.