Home > DevOps > What is the Connection Between IoT and DevOps? 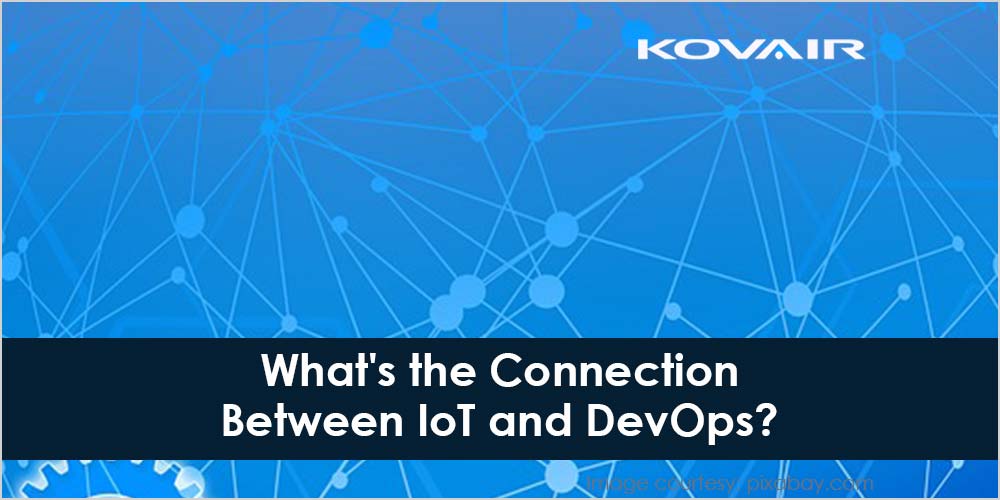 IoT and DevOps are the latest additions to the information technology sector. DevOps is the combination of ‘Development and Operations’ while IoT represents the ‘Internet of Things’. DevOps is a complete software delivery procedure that emphasizes the collaboration between operations and developers’ team. It includes product lifecycle management, developing operations and software professionals.

DevOps focus on automating the process of testing the product, integrating software, infrastructure and deployment changes. The basic purpose is to develop a healthy environment where creation, testing, and release of software can take place quickly and regularly. IoT, on the other hand, talks about all the things connected to the internet to decrease human intervention and effort.

The Connection Between IoT and DevOps

DevOps is the complete automation of Agile, through processes and tools that put away the outdated latency from the development of the application. Transformations based on DevOps are systematic to both ISVs (independent software vendors) and enterprises. People from the IT industry know that it’s very important to make the best use of big data, cloud computing, and the IoT (Internet of Things).

Some folks may find it slightly hard to understand the connections. For instance, you will not find satisfactory answers from IoT system managers if you ask about DevOps’ best deployment. It’s not very difficult to comprehend if you pay close attention.

First off, IoT is based on automated integration testing, security testing, and deployment. DevOps systems require checking security about the information emitting from sensors. These entry points are compromised easily, like somebody hacking your thermostat and transferring misleading data. The security testing tools of DevOps should regress through the internet of things (IoT) application to make sure that the exposure is reduced.

The continuous integration makes sure that the Internet of things (IoT) applications that belong to DevOps are considered as a holistic system or application. All these constituent parts depend upon one another, even components that aren’t under direct control, like sensors that are embedded in machines. This is slightly different from the traditional methods to DevOps, where all constituents are under direct control.

Deployment is considered to be the most significant component when it comes to DevOps IoT. The application requires living on the platform as well as the functioning and playing using remote devices. The deployment processes get complicated due to this. There can be some updates to the application that exists on a central cloud platform, and maybe even firmware updates that exist on a device or remote sensor.

Now, just think about the mobile apps that can operate WiFi-enabled ceiling fans. Whenever the app is updated on both Android and iOS devices, probably they require to push an update to ceiling fan as part of the deployment process, assuming a firmware update is needed to support the new changes made to the application. All these things should happen simultaneously to make the deployment successful. Updating one or other would possibly cause system failure, and make the fan owners depressed.

Most of the people might be struggling when it comes to understanding different topics about the Development Operations and Internet of Things.

Although some workplaces may have issues with DevOps and IoT, yet connections can indeed be established and people can benefit from the nuptial of DevOps and IoT.  The developers of IoT applications already comprehend these connections and carry on their advancement toward collaboration. On the other hand, enterprises are new to the concept of ‘Development and Operations’ (DevOps). So, they still need to get onboard.

Importance of DevOps in the Internet of Things

The IoT development is bringing a revolutionary change in the IT industry and people have started to take benefits of this. DevOps role in IoT or the internet of things is of great importance. Here we are going to highlight six reasons emphasizing DevOps roles in IoT.

The DevOps proved its worth at the enterprise level and it is now growing toward edge devices and gateways to tackle all the development challenges and to manage IoT systems.

Nicole Cowart is a freelance writer with plenty of experience in integrated technology. She has written a lot about new technological inventions and their application in the business industry. Her write-ups provide help to those wondering to know about the new technological terms like DevOps and IoT.