‘Kovair vSphere Integration Adapter’allows vSphere to connect to Kovair Omnibus Integration Platform and thereby allocate server resource for running test automation tools e.g. QTP and Selenium that are hooked into the system through Omnibus. By integrating vSphere with Omnibus, both IT support and development teams can leverage automation, process efficiency, cross-team visibility and improved productivity.

There are two components of the adapter:

How the Adapter Works

Whenever developer checks in code to Source Control Repository after implementing of requirements or defects, those need to be tested. As per the organization policy whenever a build is triggered either automatically or manually, automatic provisioning plays an important role.

Kovair VMware integration fully caters this scenario. Once the build is done through a preferred build engine the deployment needs to be provisioned and for the post-development activity. Also, in the case of build failure due to some vulnerable check-in the build engineer and development manager need to be notified immediately for proper action.

With the Kovair Omnibus integration in place, the automatic notification and provisioning can be done smoothly once the build is done by tools like Hudson, TFS. To facilitate the process, the server resources – virtual machines need to be created and allocated for testing. If test automation is in place, Kovair Omnibus can also trigger the automated testing scripts to execute the defined test cases on the deployed application.

The Kovair vSphere adapter handles the entire deployment process in the background once the build is done. The updates for the entire process get tracked in Omnibus platform for reporting and traceability. Additionally, these data can be re-routed to other desired tools through Omnibus.

Kovair Adapter for vSphere is tailored for Omnibus to support bi-directional data flow. Live node and host data are synced with Omnibus at regular interval. The adapter can also take command from Omnibus to perform an action in vSphere like the creation of VM from template and switching on and off VMs. 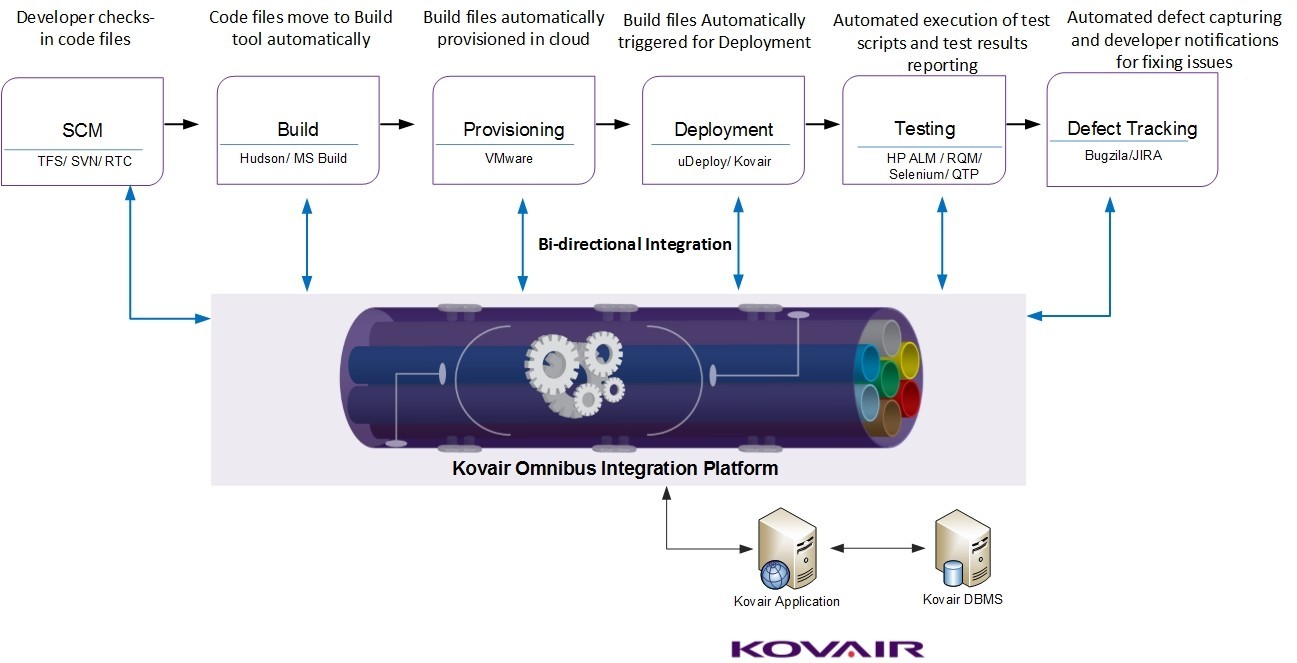 Note: The adapter as developed and offered by Kovair follows the subject tool’s standard specifications. Any deviations from the tool’s typical use pattern may not have been anticipated in our off-the-shelf product. For any customization or special configuration needs, please contact Kovair Sales – sales@kovair.com