VSTS 2015, formerly known as Visual Studio Online – VSO is the cloud version of Team Foundation Server-TFS from Microsoft. It enables users to set up and run development projects in minutes without having to install or configure even a single server. With VSO in place, individual development teams, mid-size companies as well as large enterprises can leave their on-premise infrastructure behind and run complex projects on the cloud in full swing.

VSO allows users to host their code in the cloud and access it anytime, anywhere; automates build processes; plans, deploys and manages an entire project across teams, as well as provides insights into any application whether it runs on premises or on the cloud.

Teams that are using TFS on-premise can also take an advantage of VSO services like load testing and Application insights, when needed. VSO also acts as a source control repository.

Kovair’s integration with Visual Studio Online enhances the usability of VSO and allows development teams to work in a fully integrated tool setup for agile planning and portfolio management.

The integration of VSO with Kovair Omnibus allows bi-directional flow of VSO work items between a wide variety of on-premises and cloud tools such as the Team Foundation Server (TFS 2013), HP ALM, or Rally. This integration facilitates data collaboration among various tools, thus providing a centralized view of the Unified Software Development processes in the cloud.

Enterprise level organizations seeking to integrate development, testing, and project management teams to dramatically increase collaboration, productivity and traceability can take an advantage of Omnibus integration platform. Through Omnibus, Microsoft TFS users can bi-directionally synchronize VSO work items and defects between TFS 2013 on-premises and other ALM and QA systems, such as the HP ALM or Atlassian JIRA. 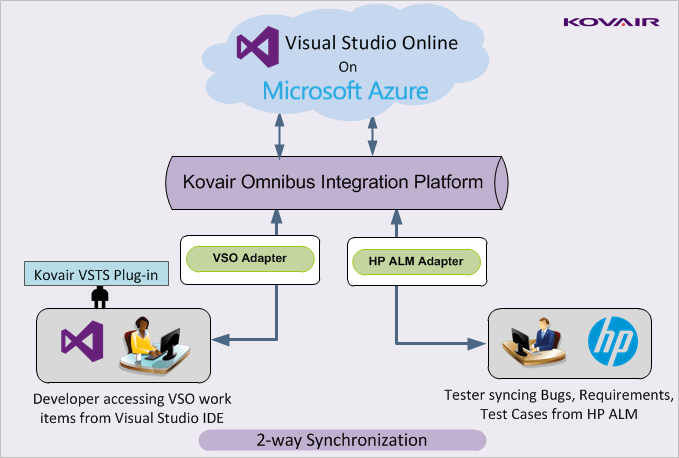 With the help of powerful Omnibus plug-in framework, developers using Eclipse IDE or VSTS IDE can also bring VSO work items and defects into Eclipse or VSTS and work on them from the IDE itself.

Thus, Customers looking to migrate the most commonly requested data from on-premise TFS to Visual Studio Online can easily keep the data intact by mapping the source and destination tools with all required validations. The data migration support includes migration of historical information for work items, version control change sets, test cases, test results, and all the relationships between them in an incremental manner. Currently Kovair provides this data migration service to TFS 2013 users.

Bi-directional support for interrelationship between artifacts across various heterogeneous tools can be achieved. Users can get traceability data from VSO along with the relationships and vice versa.

Data can be pulled or pushed from various Microsoft and non-Microsoft tools.

With powerful reporting engine of Kovair platform, Project managers and Development leads can keep a track of test cases being executed, defects being created, monitored and repaired by the whole development teams.

TFS work items on the cloud and other project artifacts across the tools can be optionally stored in a central repository, thus avoiding wastage of resources involved in manual hand-offs among team members.

In an organization, testing teams using HP ALM and JIRA for a few years can utilize their existing test cases and bugs by pushing them to VSO, so that the artifacts become visible across development teams. Thus Kovair ensures that developers are able to create a virtual consolidated platform consisting of best-of-breed tools where they can manage requirements, test cases, codes, defects with a single view. Similarly, on premises users get the real-time updates of the same artifacts without leaving their preferred tool environment.