Veracode delivers the application security solutions and services required by today’s software-driven world. Veracode’s unified platform assesses and improves the security of applications from inception through production so that businesses can confidently innovate with the applications they build, buy and assemble as well as the components they integrate into their environments.

Integrating Security Testing within development and the operations teams is becoming the new norm, but this migration needs newer thinking, with newer processes, methods and tools. Full Product Lifecycle Management with Risk/Hazard Assessments are needed with Security in mind.

The Kovair Omnibus Adapter for Veracode allows you to maximize the benefits of static and dynamic security testing for your application by colaborating the Security Test Result.

Why Integrate Veracode with Kovair?

Use Case Scenario with Kovair Veracode

Let us consider a typical use case scenario where the Veracode tool is integrated with Kovair application using Kovair adapter for Veracode and Kovair Omnibus platform. 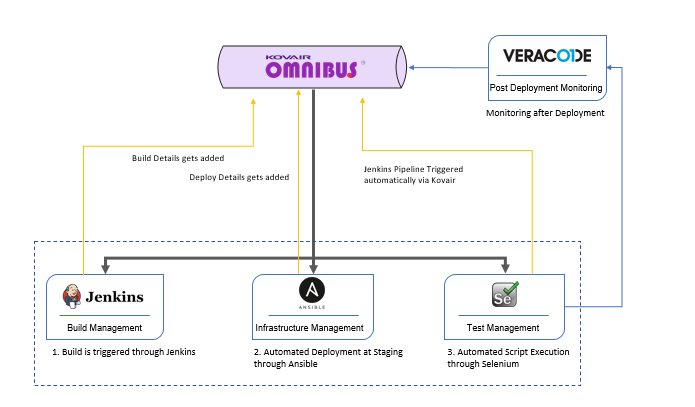