TeamCity is a closed source, Java-based build management and continuous integration server from JetBrains. Kovair Omnibus integrates TeamCity 8.1 with other best-of-breed ALM tools to provide a centralized view of the unified software development.

Kovair integration with TeamCity is a step towards the DevOps solution. The primary objective of the integration is to provide a 360 degree view of Build, Steps and Results from Kovair Traceability View.

The ‘TeamCity 8.1 Integration Adapter’ allows TeamCity to connect to Kovair Omnibus Integration Platform and thereby synchronize with other ALM tools in the system. The adapter has been so architected so that it can be up and running for any existing TeamCity setup, as well as new TeamCity setup.

The integration between TeamCity and other ALM tools provides a convenient way for managing Build Configurations, Build Steps and Builds.

The integration framework contains two components – an adapter and a plug-in.

Kovair TeamCity Integration Adapter: It is a WCF Service that exposes TeamCity entities, entity fields and relations. It also acts as a connector to trigger a Build in TeamCity from Kovair Application.

Kovair Listener plug-in for TeamCity: It is a custom plug-in that collects TeamCity events and results and then pushes them to the adapter. The plug-in needs to be deployed at TeamCity server. 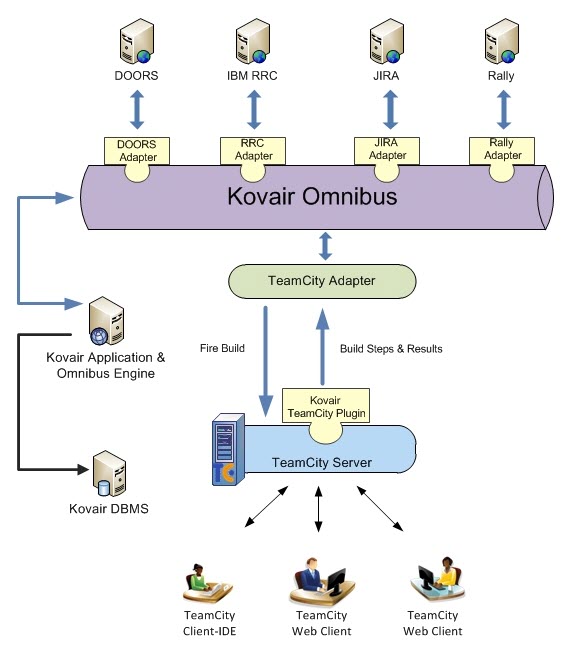 Through Kovair Application and TeamCity connector one can fire a Build from remote location. The user does not need to log in to TeamCity. Kovair ALM allows the user to fire build through the user interface.

Management users always need a consolidate view about the Build status, the related steps and the final results. This integration provides the management user to have a complete traceability of Build, Steps and result. User can directly click on a link in Build result to navigate into the TeamCity artifacts.

Using Kovair Omnibus Integration Platform and Kovair TeamCity Adapter, one can integrate TeamCity with a defect tracking system, such as JIRA and reduce the need of maintaining change log. This integration allows you to track the Builds results and Build artifacts from TeamCity into JIRA.

Let us consider an integration scenario between TeamCity and Kovair.