Jenkins is a popular open source tool for continuous integration and build automation. Over the time, Jenkins has become the open source standard for managing the development side of DevOps, from source code management to delivering code to production. Jenkins also supporting continuous integration, where code from individual developers are merged into a deployed project at an estimated interval and are continuously tested to avoid downstream problems. CD takes this a step further to ensure that all merged codes are always in a production-ready state.

The ‘Kovair Jenkins Integration Adapter’ allows rich data from Jenkins to be monitored and captured to Kovair Omnibus Integration Platform and thereby synchronize with other ALM tools in the system. The primary objective of the integration is to provide a consolidated single interface to the end user; for detailing of Build, Job, Pipeline, and Pipeline execution with traceability.

The integration between Jenkins and Kovair ALM is a deep level integration. It enables users to avail single click deployment from the ALM interface. Kovair with its rich integration adapter can extract pipeline as well as pipeline execution details to Kovair ALM.

The integration — between Jenkins, Omnibus, and other ALM tools — provides a convenient way for managing Build, Build Steps, and Pipeline. The integration framework contains two components — an adapter and a plug-in.

Why Integrate Jenkins with Kovair? 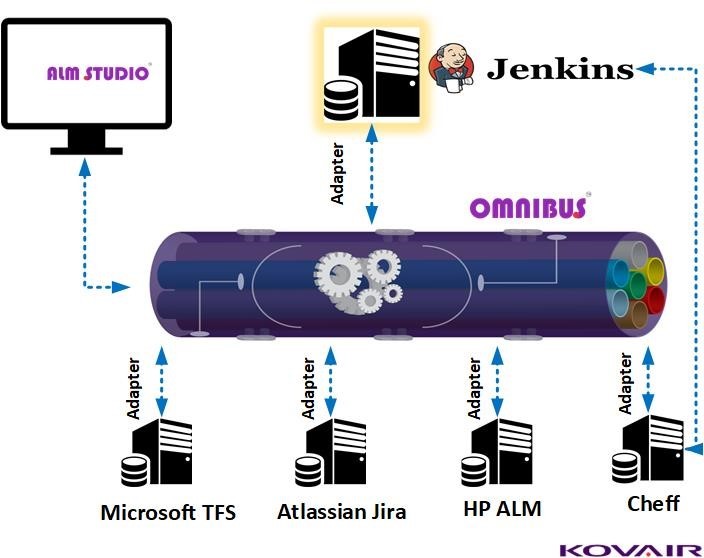 Defect TrackingUsing Kovair Omnibus Integration Platform and relevant adapters, you can integrate Jenkins with defect tracking systems such as JIRA and reduce the need of maintaining change log.

Improved Product QualityBugs that arise when changes are merged with the source control repository are rarely identified because the problem is not localized. It mainly arises from the interaction between two pieces of work. Often, integration bugs start infecting the system weeks or months after they were inserted. As a result, it takes a lot of effort to identify those bugs.

Continuous Integration with Jenkins ensures that a vast majority of integration bugs manifest themselves immediately and are easy to detect. This greatly reduces the scope of search for the integration bugs. If you cannot find the bug, you can avoid putting the offending code into the product so that in the worst case you do not add the feature that contains the bug.